Leading Through Uncertainty- An interview with Nathan Furr 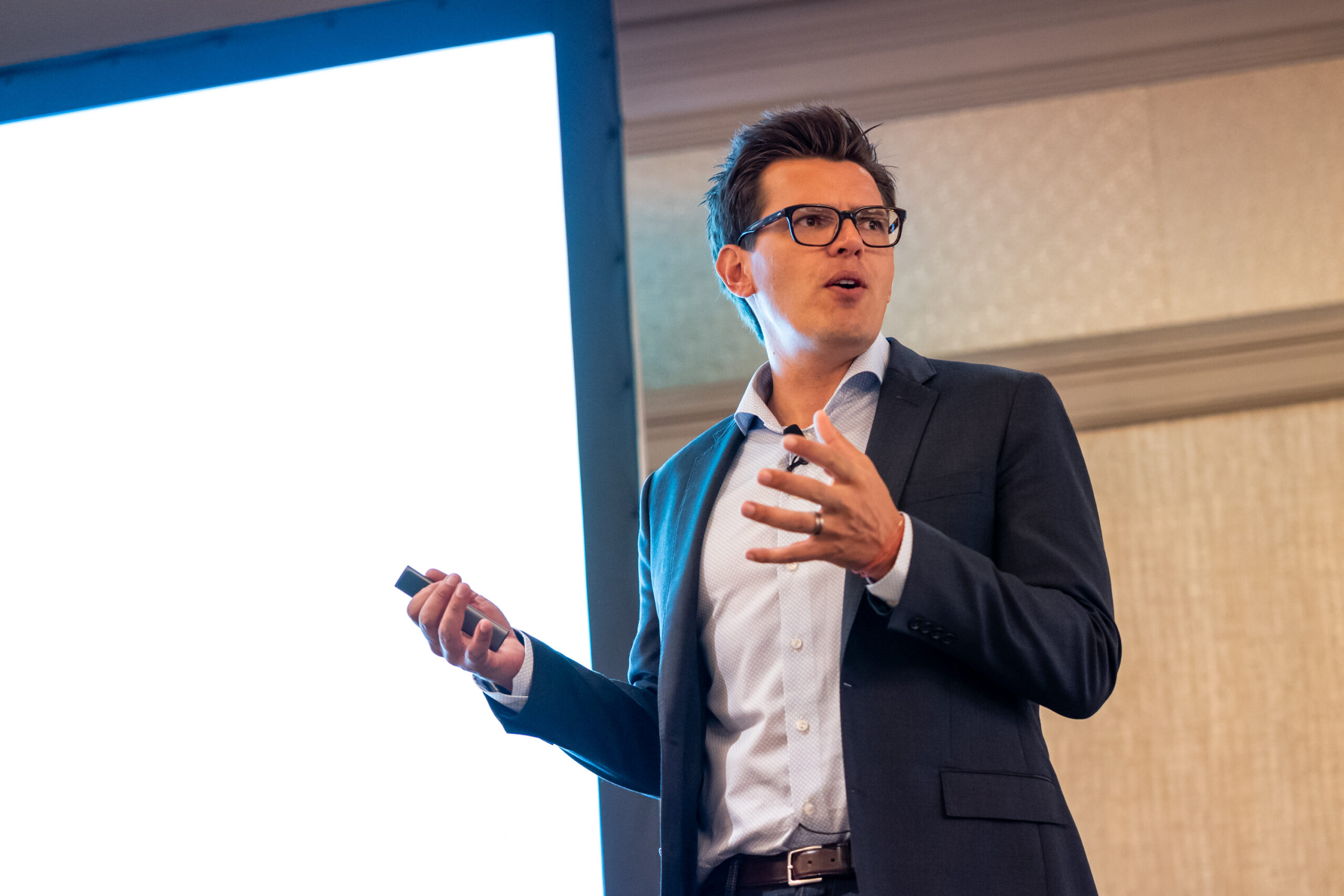 “If innovation is solving problems, big and small, then that’s what I want to be

If you are a student of Nathan Furr, then count yourself lucky. Associate Professor of Strategy at INSEAD (one of the world’s leading Graduate and Business schools), Nathan, possesses that combination of fierce intellect, playful curiosity and genuine compassion for others that makes him one of a kind. The focus of Nathan’s work? Innovation and technology strategy. A headline speaker at this years WOBI on Digital Transformation conference in Sydney, Nathan is transfixed by questions such as how do we come up with ideas?  How do leaders navigate uncertainty?  And… who leads well in the transformation space and why?

Nathan earned his Ph.D from the Stanford Technology Ventures Program at Stanford University and is a life long scholar confessing to always reading 5-6 books at a time.  He’s also successfully merged the two worlds of academia and business and has published a slew of best-selling books, papers and articles.  It was enriching to meet and talk with Nathan and discover why he is so passionate about innovation, his views on the future, his role in ranking America’s 100 most innovative leaders and most importantly to find out what’s on his reading list right now.

What is the focus of your research and work at present?

Underneath all my books is a very simple hypothesis. And that is, we are entering an era of uncertainty and change. It’s terrifying and frightening for people. But the truth is with uncertainty and change there’s opportunity.  Because the barriers to do new things to change the world have never been lower. We’re living in a world of opportunity.  It’s never been easier to be a hardware entrepreneur or a software entrepreneur, or to have a new idea and to get that idea out there.

But many of our tools and frameworks were developed for a different era, a more stable era. And so my question is:

I’m curious about how we develop uncertainty capability. I am really interested in the question: Why do some innovators and leaders have an ability to tolerate or navigate the uncertainty in a different way. It’s not a new idea, John Keats, the romantic poet called it “negative capability”-the ability to entertain the uncertainty without having to shut it down prematurely.

What motivated you to research and work in the transformation space in the first place?

The reason why I work in innovation is that at the root it’s about solving problems. I remember this defining moment when I was at Stanford University doing my PhD, and I was debating about the commitment to an academic path versus going out and doing other things. I was really inspired by a course called Design for Extreme Affordability. In it, the students tried to rethink how we solve some very common problems. For example, one of the projects was how do we treat infants in developing countries who are born prematurely and then die because they can’t stay warm.

Well-meaning philanthropists had tried to solve this problem by donating incubators but they are expensive so you can’t have that many and they end up in urban centres, so there’s not a repair ecosystem to support them.  So in the end, these incubators end up in the corner gathering dust. But what the students in this course did was to fundamentally rethink how to solve that problem.   And what they did instead was to create a little sleeping bag accompanied by a pouch filled with a wax compound. And the compound is just the right composition so that you can throw that pouch into a pot of boiling water, it melts at just the right temperature, that when you insert it to the sleeping bag, it keeps the baby warm. And so now a solution that had cost $10,000 could be delivered for $20. And for me, that was the defining moment. I said if that’s what innovation is, if innovation is solving problems, big and small, then that’s what I want to be involved with. I want to figure out how do we do that? How do we do it better? And obviously, it’s an incredibly nebulous process. So it’s a hard thing to unpack in a simple formula. But how do we do it better? And how do we unleash people’s creativity to solve the problems we have around us?

What does the future look like? What is ahead in the next 20 years?

There’s a lot of change happening. I’m not one of the people who believes that everything will be replaced by robots. Artificial intelligence, actually, is decades away from being able to do what humans do. But I think the need for people to do jobs that require creativity, emotional intelligence, social intelligence will always be there. And what I think technology will do is it will just shift the way we do work. So my hope is, frankly, that technology could reduce the number of jobs that are mindless and soul-crushing for people, and allow people to do the things that they add more value in. And so there will be change. I’m a little frightened about that. I see these politically extreme outcomes, like in Britain, in the US and in France, as symptoms of that. And so I think we are going to have to think collectively, how do we go through an industrial revolution without so much human cost? So in the first industrial revolution, yes, our lives are materially better, the material well being is much higher than before, but there was a lot of human cost in that transition. So how do we help people bridge that divide is an important question we need to be asking ourselves.

You are part of the team that researches and decides who is on the Forbes Innovative Leader list. The Symes Report champions gender equality and women in leadership initiatives. How can we see more women on that list and what will it take for that to happen?

But that reveals really quickly the systemic biases. So for example, on the list of the world’s most innovative leaders, we use this academic technique where you search through press/media and you extract the mentions of people.  But if you look at how many female CEOs there are on the S&P 500, it is extremely low. So immediately, our sample is biased. We proactively tried to include more women innovators in there, and they have incredible stories to tell, like Robin Chase, who is the founder of Zipcar, one of the first car-sharing startups. Robin talked to us about the challenges of raising equity as a woman.   So one of the things I’m working on, it’s not complete yet, but I’m working with a group to try to create a list of the top female leaders of innovation.

I think we have to work proactively to recognise the under-recognised. Because one of the oldest things we know in the organisation field is what’s known as “The Matthew Effect” “The Matthew Effect” comes from the Bible and what it means is that to those who are given more will be given and those who have not be given, more will be taken away. It doesn’t make sense in any religious sense. But it’s a perfect description of a very well known social, psychological factor, which is that we tend to over-attribute achievements to the visible winners – disproportionately more than we should. So there’s all these incredible people, women, other people who are of any form of diversity, who are doing incredibly important things that are not being recognised because we have a system that tends to award a few people in the spotlight. Because if creativity is about accessing diverse ideas, how do we get access to this?

In your talk, you outlined the personal qualities/skills required to be innovative and you mentioned networking for ideas. I imagine that you are someone who encourages reading broadly – what are you reading at the moment?

Right now, I actually read quite broadly. I’m reading the Colossus of Maroussi by Henry Miller. It’s a travel book but Miller is an incredible literary artist writing about Greece. I’m also reading a book called Do Dice Play God by Ian Stewart, which is about the mathematics of uncertainty. So what you see is I’m reading books in literature and books in mathematics.

I also have been reading books in physics. So the big idea is, follow your curiosity and see how it connects. Beside my bed is a dresser stacked full of books from anything about the history of oranges, to psychology, to economics to literature. I feel that literature has so much to teach us.

Associating and putting different things together is the essence of creativity. It’s fed by four behaviours: questioning, observing, experimenting, and idea networking which I identify in “The Innovators Method.” So you should, of course, be reading about creativity. But you should also be reading about the things that inspire you. If you look at Nobel Prize winners, yes they’re obsessed about their particular problem. But they also understand classical music, or they understand car mechanics.  When I read about literature, a lot of times I’m picking up clues about the nature of uncertainty and change, and how to think about that. It’s always fascinating to connect the dots.

According to Nathan, books are an incredible resource for creativity. But what of his own books? I think Nathan’s humility precludes him from stating that his latest book “Leading Transformation: How to Take Charge of Your Company’s Future,” co-written with Kyle Nel and Thomas Zoega Ramsoy, is one of the most unique and cutting edge business books on the market. The concept and the blueprint for strategy provided are literally out of this world. The use of science fiction writers is recommended to help create a future strategy for organisations.

The way that the writers provide ample evidence and case studies to prove this is an incredibly effective approach. And if you consider that the genius of Steve Jobs and Bill Gates was in their ability to forecast an unimaginable future, this technique is potentially revolutionary. And to add to the process, “Leading Transformation” encourages the use of comic strips and storyboarding to share the strategic narrative with stakeholders. Having read a plethora of business books in 2019 I would highly recommend this one to add to any good bedside dresser.

Nathan Furr is a world thought leader in leading organisations to foster a culture of innovation and storytelling. The Symes Report are very grateful to Nathan for sharing his own story and his insights with us.