Baby Boom by Ingrid Green ‘The story of the making of b.box’ 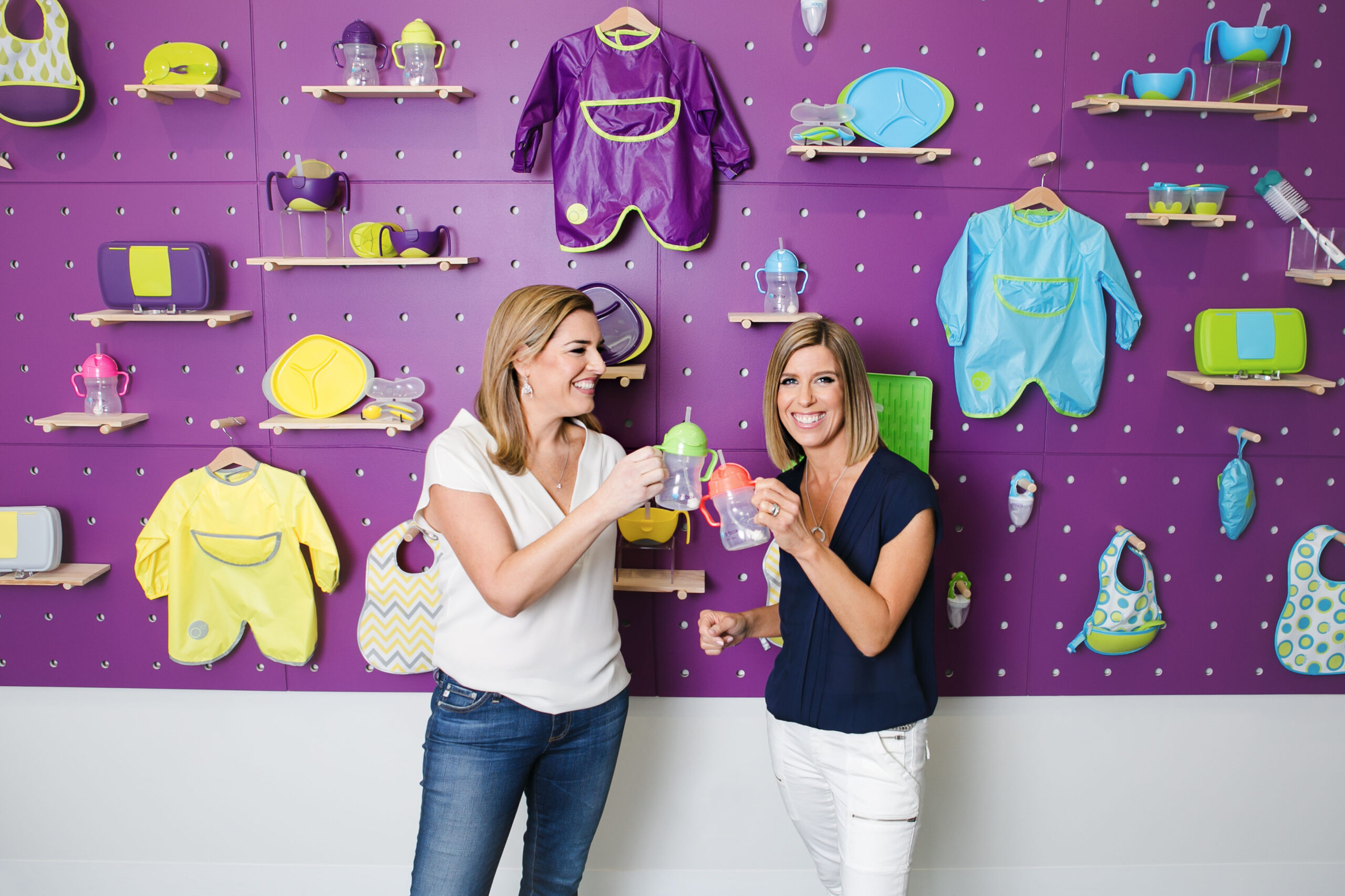 When long-time friends Monique Filer and Dannielle Michaels decided to start their own business, they wanted to create an entrepreneurial and mentally stimulating venture that would fit in with their families. That business, ‘b.box’ now exports to 35 countries and employs 22 people – including both of their husbands. Happily, people have stopped asking them “when are you going back to work?” Both with intense corporate backgrounds – Monique in finance and operations and Dannielle in marketing and communication, they were well placed to set out on their own. But they needed a product. Enter, kids.

“The idea really came from me travelling with a newborn and having to change her on a plane,” says Dannielle. “I was complaining about how annoying and frustrating it was and we started brainstorming.” They came up with a prototype nappy wallet and took it to an industrial designer, then did retail and market testing.

Two years after its initial conception, the nappy wallet – or essential baby box – was born.

This was quickly followed by a travel bib and diaper caddy. There were cashflow issues and a shoestring budget. But they were well on their way. Innovation, they say, has been key to their success. “Everything we do needs to be a little bit different to everything else on the market. The sippy cup was a big innovation. “It doesn’t matter what angle the cup is on, the straw is always in the water. With the fork, it doesn’t matter what angle you put it in their mouths, it’s always the right way.

“The innovation comes through the functionality. The other thing that makes us different is how we genuinely look at our end user – in our case, parents of kids aged 6 months to early primary. We do focus groups, for example with the cutlery, we look at how kids use cutlery – not just our cutlery but all cutlery on the market. How do they hold it? How are they trying to put it in their mouth?“

We realised in doing a lot of market research and talking to a lot of parents – you get to understand what the problems are. What b.box does is try and solve those problems. “Sometimes people see what we’ve done and say, ‘why hasn’t anyone done that before?’”

They also get their own staff on board, with designers, marketing and sales all having their say.

“We look at it differently, as a team, and that’s how we’ve hit that sweet spot in the market.

“By the time a product gets on the market we’re pretty confident it’s filling a need that hasn’t been met.”

Branding has also been important. “When people think of b.box they think of innovation. The feeding market is very competitive. There are a lot of options. We want to stand out, so when we’re designing something we ask, how can we be different from just another bowl or another cup? So everything has a b.box twist to it.”

They’ve also learned to fail fast. “We always tell the team, let’s try it, but if it isn’t going to work let’s pull the pin quickly and move forward. We listen to our customers, we listen to our distributors.”

And they don’t take all the credit. “A lot of the success isn’t just Monique and I, it’s much more than just our initial vision. It’s key that the people we’ve brought into the team share that vision.”

The design team recently won a Good Design Award in Sydney and the head designer was there to accept it.

“It’s very much their hard work as well that goes into the products. For the team, it keeps them inspired and motivated and that external recognition is huge.”

Their values – accountability, respect, being genuine, having fun with what they do – have shaped the culture in the b.box office. “It’s a big part of how we recruit, it’s a big part of our day – we practice what we preach. If there’s a container to unload Monique and I are the first ones down there. Unloading containers or sticking labels on boxes, we do what needs to be done. We don’t have an ego-driven company at all.” Says Monique: “When we recruit now, there are a lot of things that you can train, but the wrong cultural fit can be quite toxic.” Dannielle agrees: “I think by having some flexibility with hours and respect people’s life patterns or kids, or outside commitments, I think that’s also built that culture of continuity and community.”

They say they’ve worked really hard, but have enjoyed the flexibility that running their own business has allowed. “The hours that you work in corporate and the culture of many corporates is not conducive to you being a present parent during the day,” says Dannielle. “I wanted one of us [parents] to be there when the kids were taking their first steps, but I didn’t want to lose that creative outlet, or that business outlet. I didn’t want to be out of the workforce. The business has won a stack of awards –Telstra Small Business, AusMumpreneur, product design awards – but the pair’s real passion lies with the products.

“I still get a buzz when I see someone I don’t know and they’ve actually gone into a shop and they’ve bought and used our product.“ The awards are amazing, and they’re great for ego and the business culture, but nothing is better than someone using one of our products.”

The brand has had a lot of success in Asia, including massive growth in China. Dannielle put this down to their “phenomenal partner” there. “We work with distributors we develop really strong long-term relationships with. Copycat and counterfeit products have been a challenge, so we spend a lot of money protecting our intellectual property and defending it. It’s very flattering that people like our products so much they feel they need to copy them.”

They say they’d always been aware of that risk. “It’s a matter of keeping one step ahead. Right from the start, we focused on the branding. If there is a copycat product out there, people will choose the b.box one because of the branding.”

They’ve also had to learn when to say no. “Sometimes an opportunity looks amazing but a challenge for us is to know which opportunities are the right ones,” says Dannielle. “It’s really easy to get tempted by the golden lights, like the US market, but we’ve learned that we have to stay focused. We’re very agile and we’re good at evaluating opportunities, and leaping when we want to, but it always has to come back to what’s our strategic goal? Does it match what we’re trying to achieve? Or is it a distraction that the business can’t afford or doesn’t need at that time?”

They appreciate that they’re great role models for their daughters.“Girls can do anything. The pair are still very passionate about what they do.“The key focus is building the brand, expanding products and exploring new markets. The next 10 years is an exciting chapter for the business. We’re not bored yet.”

Looking at starting your own business?

Here’s what Dannielle and Monique have to say:

Trust your instincts Be bold.

Whatever you think is going to happen, plan for the opposite

Don’t expect to be an overnight success It’s hard work and you’ve got to make a lot of sacrifices, but you’ve got to be able to push through it.

Finding a business partner means you can share that load – debate and challenge can get you to a better end point.

“If we had listened to all the ‘very helpful’ advice we were given at the start, we wouldn’t be sitting here.”